In the mining and quarrying sector, relatively high sulfates concentrations are generated as a cause of pyrite oxidation, representing significant challenges in the selection and deployment of effective wastewater treatment solutions. To give an idea of the magnitude of this problem, one ton of ore containing 1% pyrite sulfur that can produce more than 15 kg of ochre and more than 30 kg of sulfuric acid [1].

Several treatments technologies to remove sulfates from wastewater are already available in the market, such as chemical precipitation, biological processes, and ion-exchange technologies. The chemical precipitation of sulfates with lime or limestone to form gypsum is the most common method for removing sulfates from mine water, reducing sulfate concentrations to typically 1,500-2,000 mg/L and even lower than 1,200 mg/L when specific chemical reagents are used. On the other hand, biological sulfate-reducing microorganisms use sulfate as an electron acceptor to reduce it to hydrogen sulfide, which can be further oxidized to elemental sulfur [3]. These two technologies account with relatively high costs (CAPEX and OPEX) associated to a high consumption in reagents, limitations in the management of generated waste (sludge) or the use of specific materials to support corrosion.

In the last decades membrane technologies (Nanofiltration and Reverse Osmosis) have appeared as a substitute for the previously named technologies.

Nanofiltration (NF) is used when multivalent ions are mostly present in wastewater. With the use of this technology, a sulfate rejection from 93% to 98% (depending on the type of membrane used) can be achieved [3]. The main limitations of this technology are the scaling (inorganic fouling) generated on the membrane surface, and the generation of brines.

To minimize the scaling, NF units may be preceded by a pretreatment stage focused on the removal of calcium, silica, iron, manganese and suspended solids (usually a softening and a sand filtration unit).

LIFE REMINE WATER uses a NF stage (Figure 1) to remove sulphates from the wastewater generated at the mineral processing plant. As a pretreatment, a chemical precipitation (adding CO2 and NaOH) has been included to remove calcium, and a sand filter to remove remaining suspended solids. During these first months of operation, the NF has been operated with an inlet pressure of 7 bar, achieving a recovery rate between 70 and 75%, and treating around 7 m3/h. A sulphate rejection of 98% has been obtained, reaching a concentration between 50 and 55 mg/L of SO42-. During the next months, the NF stage will be optimized, and the grade of scaling of the membranes (and thus water recovery limitations and chemical cleanings needs) will be evaluated. 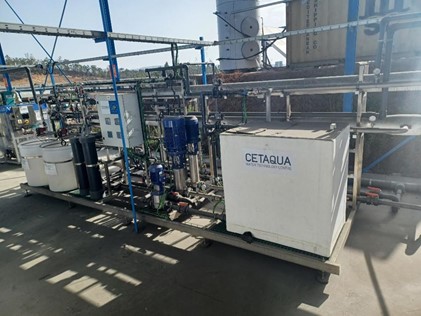